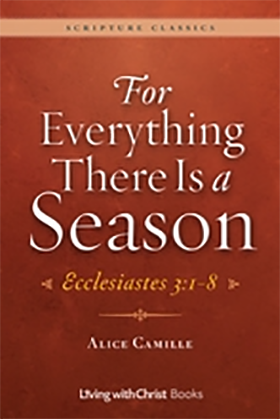 For Everything There Is a SeasonEcclesiastes 3:1-8

This pocket-friendly title from the Scripture Classics series examines a familiar Scripture passage from the Old Testament: the eight-couplet poem "For Everything There Is a Season" from the Book of Ecclesiastes. Used as the lyric of a popular 1960s folksong composed by Pete Seeger, "Turn! Turn! Turn! (To Everything There Is a Season)," the song became an anthem for the peace movement. But is this what the original writer had in mind?

Buy it in these formats:

Killing crouches at one end of the line in this poem, with healing dangling at the other. Are we to view these two forces as somehow held in a moral balance? They don’t sound morally aligned to us. Killing seems really bad, and healing really good. Is it possible under any conditions to say: "Today it is right and just to kill?" Will there be time enough tomorrow for healing and saving?

It helps to note that no one in the third century B.C. was rolling out Just War Theory. All wars seemed like holy wars to the people of Israel, convinced it was the Lord who led them into battle. A debate on capital punishment likewise would have sounded ludicrous to a community with established guidelines in the Mosaic law about when it was good and proper to kill someone. According to that law, God required some killing as an obligation and duty.

Of course, we have to be entirely honest and acknowledge that the most violent death at the center of the New Testament is frequently presented in Christian theology as something God pre-ordains, plans, and requires. Does this mean the crucifixion of Jesus is history’s ultimate "time for killing?"

<< Back to Books and Media